An international, multi-institutional team of researchers that includes a Virginia Tech graduate student recommends ways that humans can protect freshwater from salts in a recent article in the journal Science.

The recommendations include the use of less water for agricultural practices, less salt for road de-icing, less discharge or sequestering salts during mining operations, and re-routing of urban salt discharges to retention basins rather than treatment plants or streams. 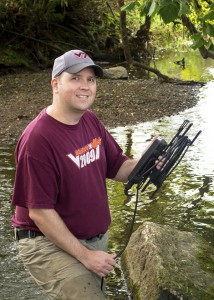 Increased salinization in freshwater is an issue that hasn’t gotten much attention in terms of science policy, according to Timpano.

Dissolved salts and other minerals are naturally found in streams, but increased levels can be toxic to aquatic invertebrates that are an important component of freshwater ecosystem food webs. At extremely high levels, salt can kill fish and other organisms that humans rely on for food.

Since 2008, when he began a master’s program in environmental sciences and engineering at Virginia Tech, the focus of Timpano’s research has been changes in biodiversity of the aquatic insect community as salinity increases in Appalachian freshwater streams.

Of the two dozen streams that Timpano monitors, those located near coal mining operations have shown the highest salt concentrations and insect losses.

Now in his third year as a doctoral student, and a member of the Interfaces of Global Change interdisciplinary graduate education program, Timpano is working on his dissertation but says he plans to continue working with the group of co-authors — a multi-disciplinary global advisory group to the Society of Environmental Toxicology and Chemistry.

“I think one of the most important things about our recommendation isn’t so much the details of the science as it is fostering the cooperation between the scientists and the other stakeholders,” Timpano said. “Getting all those stakeholders to the table and communicating that science to those stakeholders is critically important for any biodiversity protection effort to work.”

“Tony has had a unique opportunity to meet and work with leading international scientists who are advancing our knowledge of freshwater salinization,” said Stephen Schoenholtz, Timpano’s advisor, a professor in the Department of Forest Resources and Environmental Conservation in the College of Natural Resources and Environment, and director of the Virginia Water Resources Research Center. “Collaborating with these scientists to publish a synthesis paper on this topic has been a wonderful experience for Tony.”

Timpano is also advised by Carl Zipper, a professor of crop and soil environmental sciences in the College of Agriculture and Life Sciences.

Timpano and Schoenholtz are both affiliated with the Global Change Center, which is an arm of the Fralin Life Science Institute.